When the NSW railways disposed of surplus railmotors in 1998, a number were allocated to preservation groups. As part of this,  DSR&M acquired a DEB set as well as a 620/720 set. In addition to those allocated to the various museums and tourist railways, a number of cars were designated as "spare parts" cars, for the various preservation groups to recover parts in order to  restore and complete the cars. This collection of pictures shows the recovery operation carried out by DSR&M members at the Simsmetal scrap yard in Mascot, Sydney. 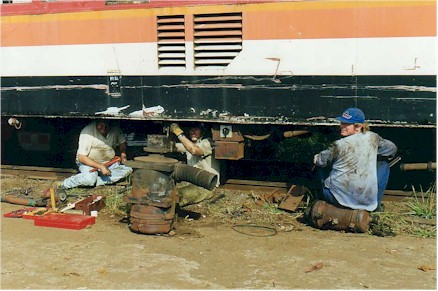 As well as removing internal fittings such as seats, lamp fittings, and so on, required for restoration of the car sets, the Museum also recovered a considerable quantity of mechanical running gear, the majority of which is located underneath the cars. This image shows members engaged in the removal of some of this equipment. 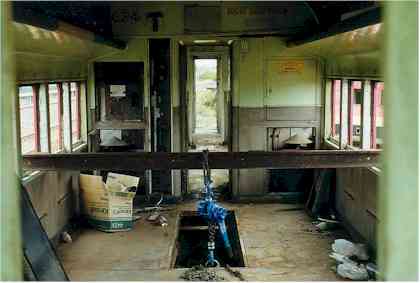 Inside the car, all seats and useful fittings, including the windows, have been removed. This allowed the erection of the homemade "gantry crane" shown here to lower one of the motors which would otherwise have been impossible to remove from underneath the car. Methods such as this are widely used in DSR&M as they allow work to be carries out with the minimum expenditure of scarce cash, and the ingenuity and willingness of members to provide volunteer labor enables the Museum to carry out complex and difficult tasks which would otherwise be beyond it's resources.

Fortuitously, while we were working on the railmotor job at Mascot, Simsmetal scrapped a number of 48 class locomotives. Our good relations with Simsmetal allowed us to recover a number of parts which are required for the restoration of 4822, the example of this class in our collection. 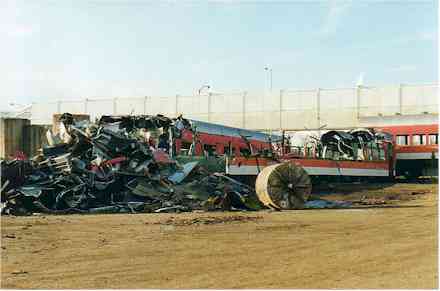 The end result - once we had finished our recovery operations, Simsmetal moved in and quickly reduced TB801 to scrap. 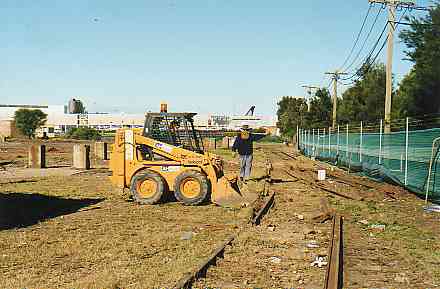 As the site at Mascot was due to be redeveloped, the rail sidings were no longer required, and were intended to be merely buried under the fill which was to be used for site remediation. Never being ones to let such an opportunity pass, DSR&M members removed the track for reuse on the Museum site in Dorrigo. On this occasion, time was of the essence, as the redevelopment of the site was due to start immediately, so we resorted to hiring a Bobcat to speed up the operation, rather than use our normal labour-intensive, but slow, methods. Indeed, so limited was the time to us that at the end of the job, one side of the site was being filled as we were still working on the other. 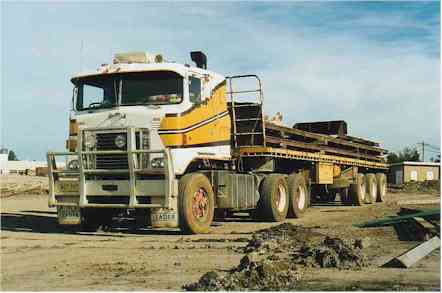 The end result of this work was several truckloads of recovered equipment. In this view, the Museum's truck has been loaded with the recovered rail, and is about to set of for the long haul back to Dorrigo. This would have been one of very few trips that our truck has made up the Pacific Highway without requiring oversize permits and signs!

Finally, a photo of some of the crew. This task at Mascot was spread over several weekends, and involved members primarily from Sydney and Newcastle. As different members attended at different times, we do not have a picture of the entire crew. Apologies are extended to those whose image has not been recorded for posterity. 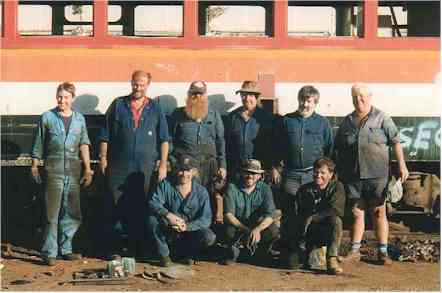