Track Construction on the Museum Display Site in Dorrigo. 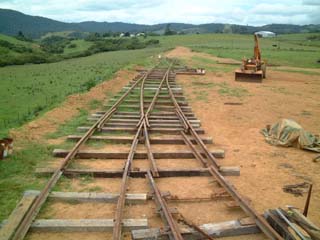 The first left hand turnout constructed on the display site. This road continues down the earthworks to connect the Display Site roads to the Branch Line. 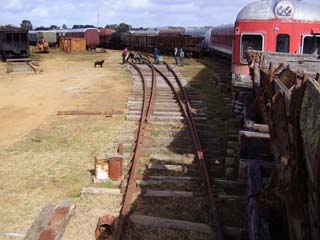 Museum members constructing a curved left hand turnout to connect 4 and 5 roads of the Display Site to the Branch Line connection. 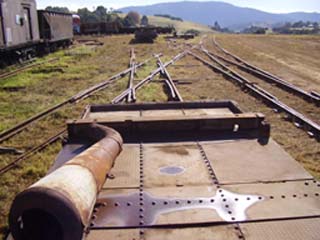 The Museum has acquired both a Diamond Crossing and an Outside Slip for incorporation within the Display Site track layout. These components as shown above, have been laid out to ensure their correct alignment, prior to installing the point timbers 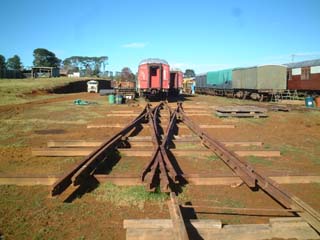 The Museum has also acquired a Double Slip for incorporation in our future display of Per Way components. Again the Double Slip has been incorporated into the Display Site track layout and the above picture shows the rails having been laid out in preparation for the reconstruction of the Double Slip.

Locomotives Currently in Storage in Dorrigo.

These aerial views, taken from a helicopter, record the progress being made on the site of the future display building, which forms part of the 53 acres owned by the Museum.

These two comparative views, looking due North show the development of the display site, with numerous paired tracks separated by public corridors. The display area is being excavated from left to right, and there are currently over 200 rail vehicles on this site alone. The 2005 view shows the progress in made with assembling 9 and 10 roads as well as the concrete pathways laid between 4 and 5 roads, and 6 and 7 roads, completed for the initial limited public opening. The public entrance and facilities will be constructed in the right foreground, adjacent to the new excavation, which will create 11 and 12 roads and another public corridor.

The Museum display site is the main feature of these views, this time looking South, with Dorrigo railway yard on the left. As the display site develops sideways toward the street, and additional paired tracks are laid, the collection in the railway yard will be transferred onto the display site for public viewing. Some of the additional trackwork, such as a double slip and an outside slip, can be seen being assembled in the throat area in the foreground.